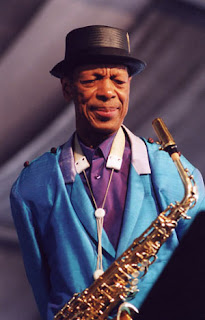 The first time I heard Ornette Coleman's music was one of those moments when I felt like my ears have been replaced by eyes.

Eyes that couldn't refuse these metaphysical binoculars being manacled onto them forcing observations of this new amazing sonic world.

It was comparable to when I was 9 years old and heard that first track off Led Zeppelin 1 played at full volume.

It was that virgin experience of Kind of Blue, after that eerie piano/bass intro followed by the call and response melody on "So What" when Miles lays down the first four notes of his solo with Cobb, Chambers and Evans behind him wandering into modal territory.

I was in High School and I was loving Lou Reed.  I found every interview, every cassette tape I could get my hand on... even the bad stuff; especially the bad stuff!  Lou kept talking about Ornette Coleman.  Ornette this, Ornette that.  I recognized the name from my Dad's Real Book and I flipped thru until I found a blues head -  I believe it was Broadway Blues.  Well I didn't get it.  I still hadn't heard him and looking at a chart with no time signature, no bar lines.... well, my classically trained little brain couldn't handle it.

Solution: a trip to Tower Records on South Street.  I left with two Ornette CDs.  (one is here) Music changed forever that car ride home.  And I think my friends banned me from picking car music for quite a long time.

It was years until my world would again be rocked by that kind of forward thinking music.  The next time was in college and I heard "The Windup" off Keith Jarrett's album, Belonging.

RIP Ornette.
Posted by reverend chris at 11:05 AM No comments: