You claim yourself an
asset yet behavior proves
you's just an Ass Hat.

Looking deep within
myself I am intrigued
by the combinations.

There once was a man from America,
Whose life was prone to hysteria,
Tho no fault of his own,
For his government was prone,
To behave as if spelled "Amerika"

Your caustic tongue shines
bright for the moth (me) so I
rush towards you inspired.

We judge ourselves by
intentions, yet others judge
by our last worst act.

He stole her chicken;
She threw fries at him. They kiss.
Relationship goals.

Beauty's Strength - a Haiku in 2 stanzas

True beauty will yell
loudly even when nature
attempts to mute it.

The past few weeks I have been informing my various musical groups of my intention: limiting the performance on non-original material and focusing on returning to the act of creating something new.  I said I would discontinue performing more than one or two covers per set (a set being 50 minutes... or 100 minutes depending on the venue).  You would think I was the Grinch and they woke up to find a few broken needles where their tree once stood.

I'm not trying to insult the countless talented people who are cover musicians.  I know some personally and they are amazing at what they do.  They get joy out of it and they bring joy to those listening.  I don't find joy in it and, quite frankly, I hate myself in the days leading up to and the day following gigs padded with cover material.  I feel like I am being dishonest with myself and it sends me into a depression-like state. 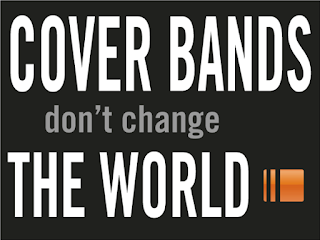 When I was emailing the bands I work with and explaining myself the reactions were priceless.  One musician said "but we don't have a lot of original material".  I didn't respond to that because: if your garden has no flowers you can plant some.  Another said I was "selling out".  And yet another wasn't sure what I meant by, what he called, this arbitrary decision. I'm pretty sure that last guy doesn't know what arbitrary means and was thinking he was using a $2 word to intelligently express his displeasure.  The bottom line is:  I can't live with myself if I continue this trend of a gig that is 95% cover material.

It amazes me because for the first 10 years I was a professional, full-time, musician the three bands I performed with only played the occasional non-original song.  An improvisational #BAM trio, a rock band and a funk/r&b band.  Between the three groups I spent about 6 years touring most of the south-east, mid-west and west coast of the United States and we played our own music.  No one cared.  The audience didn't care; the audience LOVED it.  I got to work with Bob Weir, BB King and countless other, lessor know but equally talented, people.  We were there to bring our art to the public and the public's ears sat eager to listen and - hopefully - enjoy us.  Do we blame modern times and technology for the need to have a musician play covers the entire night?  Is it the fear that we will be replaced by an iPod?

Since Hurricane Katrina and my relocation to Philadelphia I feel that, somehow, a button got pushed and people around me were more interested in spending hours perfecting someone else's composition than attempting tto stretch out; playing around in the part of our brain that cjust might find new harmonic and melodic combinations; new colors never heard before. I don't think it's laziness. I hope it's not laziness. Is it laziness?  Is it a fear?

I was driving home from a gig this weekend (about 10 hours after dealing with a pretty serious bout of food poisoning) and I got to thinking.  I do not want to have people come hear me play a cover song.  I want people to come listen to an original creation influenced by my own personal experience that just might open their eyes and change their lives.  I've seen it happen.

That being said: I'm quite pleased with the two groups I lead.  The Courtesy Shuttle is almost entirely original instrumental fusion composed by either bassist Rich Curtis or myself.  And the swing band, The High Rollers, has been making the shift to this new sound organically.

While I am boldly opposed to personally performing cover material there is a huge exception: the local songwriter.  I do not feel that a great tune written by local pianist David Dzubinski is a cover song, so we play it.  Davey Cope is a friend and helluva singer/songwriter and someone appreciating his [yet] undiscovered talent and embracing it by helping expose it to the world is a great thing.  What I don't think is necessary is someone expecting the Jimmy Winklejon Quartet to play Fly Me To The Moon with the same arrangement and ending that Sinatra did.  Or someone approaching me at a solo gig and asking for Randy Newman or (gag) Billy Joel.  Did they not see the people enjoying the instrumental that I just finished writing that day to celebrate the birth of my niece?  Did they not see the woman with a tear in her eye after one of my lyrics regarding pre-storm New Orleans?  Did most of the room not laugh-out-loud when I sang about my wife and admitted that she is the reason I shower?

This debate is probably not going to end soon, but starting August 1st I put my foot down.

You want a jukebox, buy a damn iPod.

You want live music that no place else is able to have?  Give me a call.
Posted by reverend chris at 10:55 AM No comments:

White Bean Soup - the EASIEST SOUP IN THE WORLD


This is a variation of a soup that was in a cookbook that disappeared from my kitchen a long time ago.  The flavors are simple yet memorable.  The carrots, almost undercooked, add a great crunch to this pureed soup.  The bell pepper is optional - I don't normally add it, but if it's in your fridge throw it in.  If you don't use it, add a third carrot to the lineup.

Serve with a salad or some crusty bread.  OR BOTH: it's your soup gosh darn-it.
Posted by reverend chris at 2:01 PM No comments: