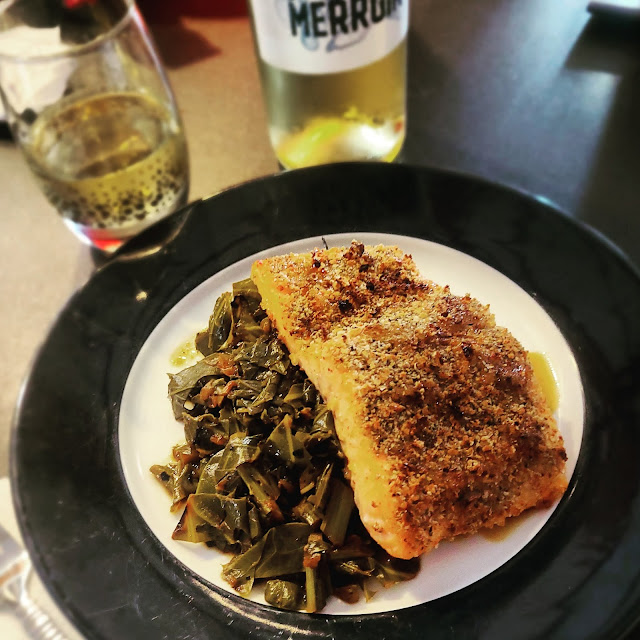 Serve over a salad or with your favorite side dish(es). I served mine with collard greens and sauvignon blanc!
Posted by reverend chris at 7:16 PM 1 comment:

Email ThisBlogThis!Share to TwitterShare to FacebookShare to Pinterest
Labels: food, how to, pescatarian, Recipe

Recently I have sat down a few times to try and write this post but I keep deleting it because I am either already too emotional or another event is brought to public light that pushes me past the point of sounding as coherent as I intended... But here goes...
If you told me when I was ten years old that in thirty years people would put signs on their lawn letting the public know they weren't racists I would have called shenanigans.  If you told me when I was thirty years old that in ten years the President who took office after our first Black President would publicly support self-proclaimed Nazis I would have laughed at you.  If - at any point of my adult life - you told me that a black youth holding a bag of Skittles is more likely to be killed by police than a white youth who shoots up a church I would have assumed you were talking about the plot of an episode of Law and Order or a Spike Lee joint.
For almost two decades I have paid my rent and bills by learning, embracing and sharing Black American Music to any ears that will listen.  While I was not born with this culture in my blood it has become one of the most important parts of what makes me who I am as an artist, as an adult and as a citizen.  So while I am happy to see so many others who are not persons-of-color joining the fight to tear down and rebuild a system that has been devolving faster and faster I am sickened by so many comments of hatred, intolerance and (what comes off as) sarcastically feigned ignorance that continue to pop up everywhere I look.  So when a few dozen of you notice that my personal page has blocked you: think back to what you said or posted.  If you notice I no longer patronize your business with friends and family: just remember a few months ago when I asked you directly why your bartender had a problem with a black man in a suit looking for matches/lighter but was fine with the homeless white person looking for a handout.
We are in a very bizarre times with this pandemic and quarantine and I have been lucky enough to have been receiving self-employed artist assistance in addition to donations from so many of you who have taken part in my live-stream performances.  So I am asking everyone reading this to join me in donating every extra cent you have to the many causes and groups established to help this battle.  Make sure you research where you are donating so that the money goes directly to pay the bail, cover expenses of families affected, et al because there are profit driven groups that don't put all your money to work for the cause.  And if someone posts a critique of #BLM cut them off social media and inform them why to their face so you can look directly into their Godless eyes.  They either don't want to attempt to understand or aren't able to understand because as a fetus they didn't get enough oxygen.
No white person breathing has the right to criticize the reaction of a community when that community has been abused, ignored and MURDERED in ways that, in the 21st Century, should be unfathomable - but the proof it is happening is right in front of us.  Being blind to actions against our neighbors, friends and family means you are no different from the diseased individuals who have stripped the future from an innocent life.
As I write this I hear laughter outside.  I look out my front window and see five children zooming up and down my Mt. Airy street.  Two on bikes, two on scooters and one running alongside with a squirt-gun.  They are different ages and they are different colors and they are laughing together.  I realize that for the first time since I started writing this, over an hour ago, the tears in my eyes are not caused by hatred I see, but these tears are because I see love.  I see the reason we must not stop fighting.